Pink Vinyl - Ten Bands One Cause

Additionally Hard Candy and Spotify worked together to provide a Ten Bands One Cause playlist that featured music from these artist and $1 for every subscriber to the playlist went to Gilda’s Club NYC.

In 2015, a new crop of artists and labels are coming to the table to grow this campaign way passed what we did last year. Run The Jewels, Sturgill Simpson, Joey Bada$$, Al Green (the first pressing of The Belle Album in 30 years), Between The Buried & Me, Chet Faker, Pierce The Veil, Primus, Clutch (a brand new album specifically for this campaign) and Ingrid Michaelson combine for nearly 20 million album sales in the US, around 8 million Facebook followers, 2, million Twitter followers and more. 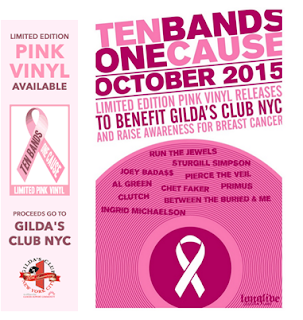 This contribution (along with others) allowed for Gilda’s Club to provide hundreds of free workshops, lectures and more to their members in 2014 Gilda’s Club was floored by our contribution. Customers found out about Gilda’s Club for the first time and posted on social media their awesome pink vinyl.

They will release their pink vinyl titles on September 29th 2015. These releases will be limited to a one time pressing.

Everyday Music will carry these titles for the cause!  The downtown PDX store will play the album selections all throughout the day and we'll have CUPCAKES! PINK CUPCAKES while they last, so make sure you stop in early on the 29th!   Plus, you know that Run The Jewels will fly out the door.