Nov. 5:  TODAY ONLY you can get the soundtrack on vinyl for the new movie from the Cohen brothers (Big Lebowski, O Brother, Where Art Thou) on vinyl for $5.98!  That's right, $5.98 at participating Everyday Music stores. (phone first!)

Inside Llewyn Davis is  about a young singer in the '60s Greenwich Village folk scene. (rumor has it it's based on Dave Van Ronk).  The movie stars Oscar Isaac, Justin Timberlake, Carey Mulligan and John Goodman.  The music was produced by T Bone Burnett and features Punch Brothers, Marcus Mumford and Justin Timberlake. 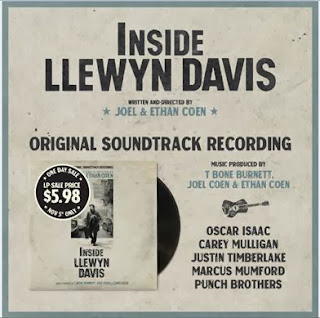 A concert version of the music from the movie took place in late September in NYC and will be shown on Showtime starting in December.  The concert features Conor Oberst, Patti Smith, Gillian Welch, Jack White, Avett Brothers, Joan Baez & more.   Movie opens December 20.
Posted by Hefte at 8:55 AM No comments: